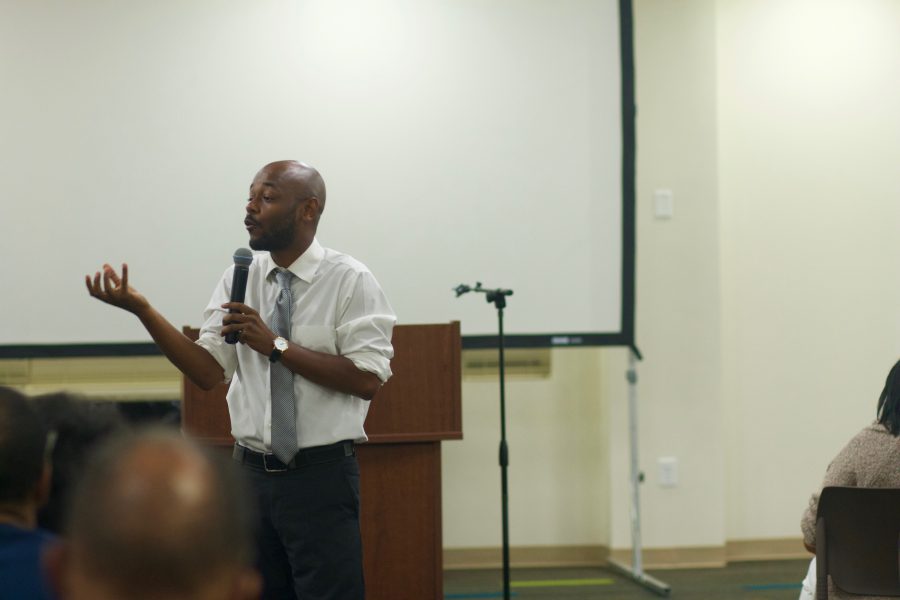 Rev. Michael Wortham, College and Young Adult Pastor, presents a message on faith and politics at the mid-week service.

ATLANTA, GA —The stakes are particularly high for the free world and America in this year’s election according to Black millennials attending mid-week service at the historic Ebenezer Baptist Church here.

But like many millennials nationwide, they are reluctant to rely upon the government for change and have less strong ties to the two-party system. Yet they are concerned about what they see unfolding before their eyes in this year’s election season.

“The free world would no longer exist if the wrong person got in office,” said 31-year-old Terrell Sass, the drummer for Ebenezer Baptist.

However, he isn’t shy about saying how the nation’s two major party candidates, Democratic Party nominee Hillary Clinton and Republican Party nominee Donald Trump, seem particularly out of touch with the black community.

“It’s not their reality. They haven’t been around the class of people that deal with that, so they want to stay far away from it,” Sass said.

“It’s a very touchy subject, and I know they know that black votes matter. So rather than saying the wrong thing, they would rather avoid it and leave it in the gray area,” he said.

Black millennials agree that these issues are not new, and that any answers to them will be greatly affected by whoever is elected this November. Now, more than ever, they want to convey just how high the stakes are.

Amidst the claps and hallelujahs, the members of Ebenezer Baptist Church raised their voices in song and concern during a Wednesday night discussion of faith and politics.

Ebenezer has a rich history within the Atlanta community. Martin Luther King Jr. was baptized as a child at the church and was ordained as a minister at the age of 19. He later co-pastored with his father, known as Daddy King, and remained in that position until his death in 1968. His funeral was held at the church.

Following King’s legacy, the church is still involved in peaceful expressions of civil rights activism within the community.

At 31-years-old the Rev. Michael Wortham isn’t the youngest minister Ebenezer has had and he’s not the most outspoken.

But he strongly believes that Blacks have a central role to play in this election year.

“We’ve got to be the catalysts to make that happen because I’ve lost faith in the political system. “Let’s figure out a way that this will become ‘we the people.’ People power makes these things happen,” Wortham said, who was pulled to the ministry in 2004 when two of his high school classmates were shot and killed.

“In that moment I realized I should be doing something more with my life. There has to be something more because my classmates shouldn’t be dead,” Wortham said.

Wortham was inspired by his father’s outlook on racial inequality, who grew up in segregated Alabama. His father had hoped that the work of the civil rights movement would carry through to future generations, but Wortham thinks there is still work to be done.

“I’m personally frustrated, it’s really just a repeat of the same issues that have been happening over the course of a generation,” Wortham said repeating a refrain heard from others including supporters of Black Lives Matter.

“Everybody’s painting this picture that we shall overcome or we have overcome, but then I’m an adult and I’m seeing a repeat of what my parents went through.”

“We’re still repeating the same issues. We see the same candidates showing up at people’s churches and people’s communities but then we don’t see them until the next election cycle,” he said.