From soccer to gymnastics, taking on leadership role 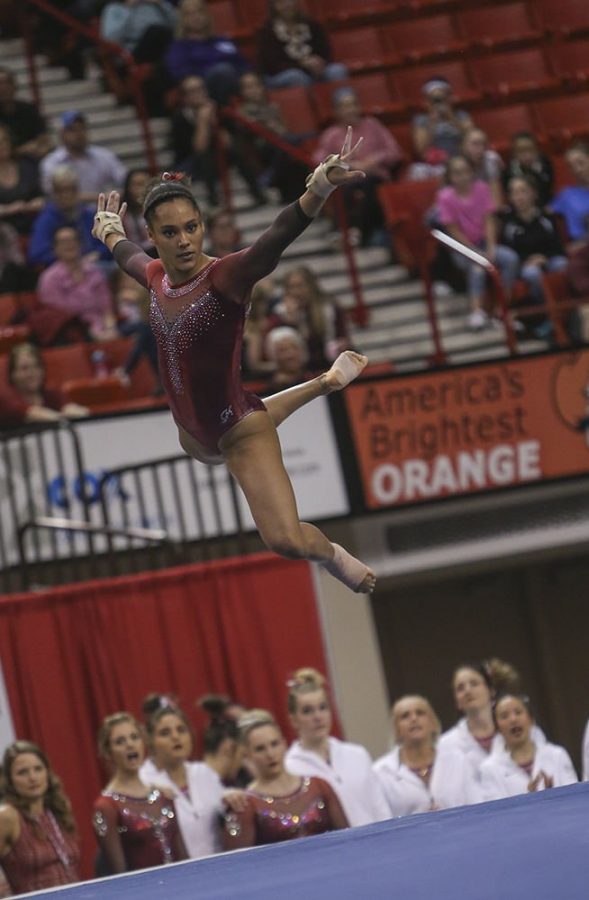 Junior AJ Jackson jumps and strikes a pose during her floor routine, Feb 10. Jackson scored a 9.975 for this event. Paxson Haws/The Daily

She settles down in her starting position and then the music starts — junior AJ Jackson’s body already knows what to do.

Never did Jackson think she would be performing at the University of Oklahoma as one of the the school’s starting gymnasts.

“I remember going to my first meet and I saw this girl doing a giant on bars and I was like, ‘wow, that is so cool,’” Jackson said. “About two years later, I was able to do those skills … It’s so cool knowing that I’ve come from what I started at and being able to do what I thought as never possible.”

Jackson began her career at six years old after trying her hand at softball and soccer.

“One of my teammates taught me how to do a cartwheel on the sidelines of one of our (soccer) games,” Jackson said. “My mom said, ‘oh, let’s try gymnastics.’ The next week I was in the gym and been there ever since.”

She quit the other sports the next year and never looked back. Jackson continued her gymnastics career and competed against Chayse Capps, current teammate, roommate and senior at OU.

“I knew as soon as she walked on campus that her and I would be instant friends, ” Capps said. “We didn’t really know each other at all (during club). … We’re inseparable at this point.”

With six Sooners graduating this season, Jackson will help lead the team as a senior, but according to head coach KJ Kindler, she is already someone the team looks up to.

“I know next year that role will only grow,” Kindler said. “She’s always earned the respect of her teammates…. She sweats more than any person in there when we’re conditioning, she kills it, and it’s noticed.”