For Oklahoma seniors, legal marijuana is a new frontier 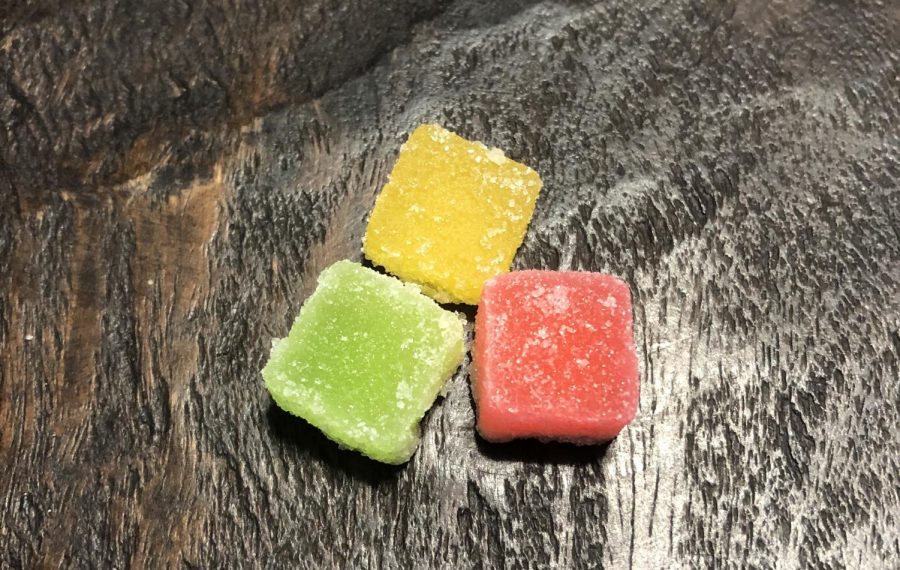 Edibles made from low THC strains of cannabis, such as these gummies, are typically recommended for patients over 65 who are not accustomed to smoking. Photo courtesy of Lawrence Cagigal.

Back doors, secret shops, shady exchanges, cryptic messages on bulletin boards. This is how Belinda Davis remembers the underground weed sales in Fayetteville, the Arkansas college town where she came of age in the 1960s.

For Davis, 76, even with the persistent tide of medical marijuana legalization reaching Oklahoma City, where she currently lives, cannabis has remained what she has always known it to be – illegal.

But with increasing joint pain in her hands, medical marijuana might help her avoid the more intense side effects of prescription drugs.

“I think there’s a need for it because I feel that there’s too much medication that’s given by prescription,” she said.

“I don’t want to lose control, but I don’t like hurting either.”

According to research published in the Journal of the American Medical Association earlier this year, between 2015 and 2018, the number of Americans age 65 and older who smoke or ingest marijuana increased two-fold from 2.4% to 4.2%. In 2006, only 0.4% of seniors reported using marijuana products.

Despite this trend, Davis said that for much of her generation it can be difficult to overcome the decades of deeply-ingrained apprehension towards pot, especially without access to crucial information.

In the past, she has relied on others to look into it for her.

Davis first became acquainted with medical marijuana when it was proposed as a potential treatment for her daughter Lisa’s lupus. Before medical marijuana was legalized in Oklahoma, she said, everything she knew on the topic came from Lisa’s fervent internet research.

The family even considered moving to Canada so that Lisa could have access to the medication without breaking the law.

“I don’t know how we could have afforded it or whether we could have or not. And we did go up there, and I liked it real well. And she did too,” Davis said about the potential move. “She just didn’t make it that far.”

Following Lisa’s death in 2016, Davis’s elder daughter, Joanna, went on to work with the State Question 788 campaign that would eventually lead to the legalization of medical marijuana in Oklahoma two years later.

It was Joanna who recommended that her mother look into medical marijuana to treat her own conditions.

But Davis said she doesn’t know how to find the answers to her questions. Neither do many of her friends. And an informational meeting at her retirement community earlier this year didn’t help.

For many of them, the next obvious place to look was towards their doctors.

However, Oklahoma City based psychiatrist Lane Peyton said that many of these doctors are unwilling or unable to clear up their patients’ cannabis confusion.

“If you just ask, you know, an open question to most doctors in the state, ‘do you support marijuana as an alternative to prescription medication?’ I imagine 90% of them would say no,” Peyton said.

“There’s a lot of siloing and territorialism in medicine. It’s not very collaborative,” he added.

Until the medical field is able to openly communicate and agree on how to handle medical marijuana, patients like Davis will continue to be uninformed, according to Peyton.

Without complete knowledge of the patient’s health history, certain pre-existing conditions may be overlooked in medical marijuana evaluations – rendering the cannabis ineffective or potentially dangerous.

Peyton hopes that with more time and research, doctors will take a more collaborative approach to medical marijuana prescriptions.

Until then, he said, he will be taking care to make sure that he personally recommends resources and dispensaries for his patients.

But Davis said that even when information is more easily accessible, it will be difficult for people like her to overcome their own anxieties and stigmas surrounding cannabis to get the answers they need.

“But yet still, down deep, we want to feel better.”

Gaylord News is a reporting project of the University of Oklahoma Gaylord College of Journalism and Mass Communication.