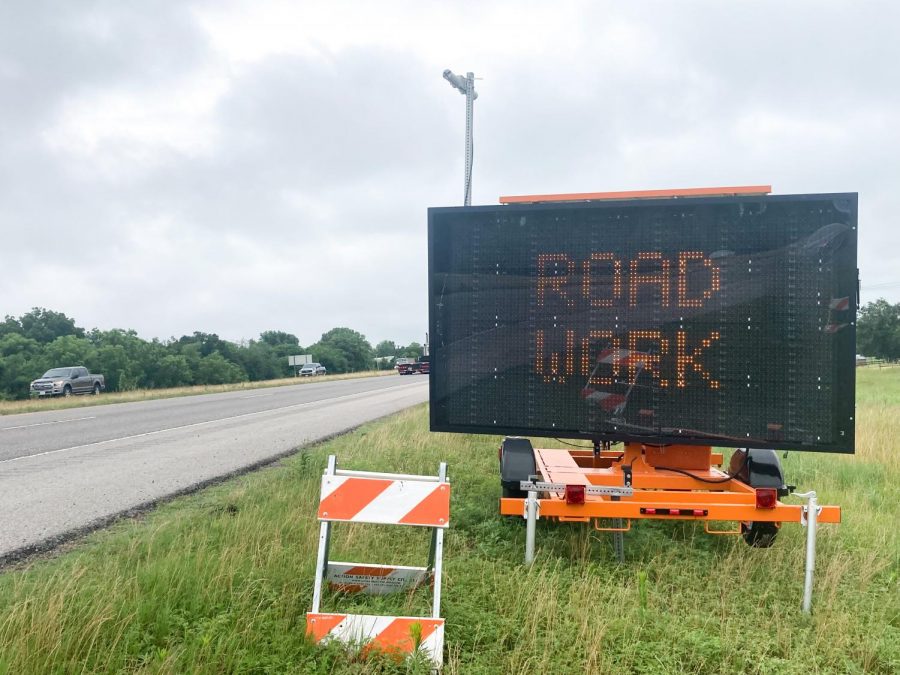 Sign warning of road work ahead on I-35 near Pauls Valley. Gaylord News/Will Blessing

WASHINGTON — Highway projects totaling $55 million submitted by three of the seven members Oklahoma Republicans are part of a massive transportation bill headed to the House floor for a vote Tuesday.

The three, Representatives Tom Cole of Moore, Stephanie Bice of Oklahoma City and Frank Lucas of Cheyenne, originally had been seeking nearly $190 million to fund 13 highway projects in their districts. The three declined to comment on their earmark requests.

Rep. Peter DeFazio (D, Oregon), the chair of the House Committee on Transportation and Infrastructure, wants to use the legislation to help further President Biden’s goals.

“The INVEST in America Act puts a core piece of President Biden’s American Jobs Plan into legislative text—seizing this once-in-a-generation opportunity to move our transportation planning out of the 1950s and toward our clean energy future,” said DeFazio. “Let’s get this done.”

The INVEST in America Act, totalling $546 billion over five years is a surface transportation authorization bill introduced by Democrats that authorizes $343 billion for roads and bridges; $109 billion for transit and $109 billion for passenger rail and freight.

All but two of the Republicans who chose to vote, voted against advancing the bill to the House floor. All of the Democrats who voted, voted in favor of the legislation. No members of the Oklahoma delegation serve on the Transportation and Infrastructure committee.

If this trend continues on the floor, there is a strong chance House Republicans may vote against the bill that includes the community projects they introduced. DeFazio has said that he would not condition Member Designated Projects on the member supporting the bill.

Bice, Cole and Lucas, the members who submitted projects, declined to comment on how they would vote on the bill.

Members that submitted projects were allotted up to $15 to $20 million for projects. Of the approved earmarks for the bill, only Lucas received funding for all of his projects at the requested amount of each.

Two of the three projects Bice asked to be included are on the bill, both of those including the specific amount of requested funding. Cole will receive funding for two of the five projects that he submitted, and only one of the two will be funded at the full requested amount.

Cole requested $72 million, the largest of the Oklahoma delegation’s requests, for the I-35 widening project in Love County, OK. Love County includes I-35 from the Red River to the Lake Murray exit in Ardmore.

“So, our understanding is that the earmark funding can be put toward any one of those projects,” said a spokeswoman for the Oklahoma Department of Transportation.

This area includes Winstar World Casino, located on the Chickasaw reservation. Cole is a member of the Chickasaw Nation, which sits two miles north of the state line.

The congressman only received $17.12 million for I-35 widening of the $72 million that he requested.

Both Reps. Kevin Hern of Tulsa and Markwayne Mullin of Westville declined to submit projects for the bill. Hern has been outspoken about his opposition to earmarks in the past, and stated that he wanted to read the transportation bill in its entirety before deciding how he wanted to vote.

Republicans have objected to this bill because they believe that the bill would be used to advance the Biden agenda.

“Despite a narrower margin of power and the President’s call for bipartisanship, the Majority never seriously considered incorporating Republican priorities and reaching a compromise,” said Rep. Sam Graves (R, Missouri), the ranking Republican on the committee.

“So we are left with another bill that lets lengthy road and bridge project delays continue eating up precious resources, handcuffs our state and local partners, leaves rural communities behind, and prioritizes the Green New Deal to an extent that cripples the real infrastructure improvements communities across the country need.”

The legislation differs from an appropriations bill now making its way through the House committee that contains more than $95 million in district projects proposed by Bice, Cole and Lucas.

The purpose of this bill is to replace the Surface Transportation Bill, a five-year project plan signed into law back in 2015 by President Barack Obama, and extended by one year due to the COVID-19 pandemic. The 2015 law will have to be extended again if Congress cannot come up with a new bill for President Biden to sign.